Good Morning, well it's officially the last Rudolph Day of 2019
You have until the 30th of November to enter your creation over at ScrappyMo's.
Here is my card. 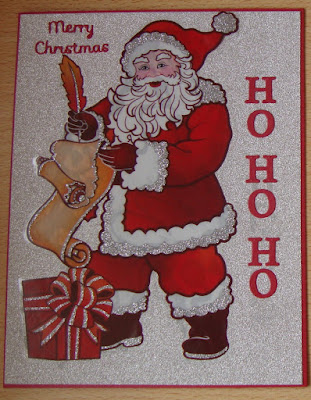 It is rather a large image so I had to make the card size to fit the image which is 8" x 6.5 inches.
The image is from a set of three WINDOW stickers.
It is pre-coloured and has lots of silver glitter on it.
They also come with red and silver snowflake (as yet not used the snowflakes.
I have also made a card using another image and that card size is 7 x 8 inches, saving that for next years RD.
The third image would make a 12 x 7.5" card, not done that yet.
They are on a sheet of film type thing and if putting them on your windows you just put them on and they cling but I have used Cosmic shimmer acrylic glue as they were going on to glitter card.
The glitter card is from B and M - 12 sheets (non Shred) for £1.99
The Santa images are 99p a sheet of 3 from Lidl plus snowflakes.
Three big card for just under 50p.
Well ok there is the card and the backing card  as well but from stuff I have had for ages.
I also bought a set of Snowmen which I will be showing in a couple of weeks time.

Thanks so much for popping by and any comments you are kind enough to leave.
Posted by Kathleen at 09:30

Now that's what I call thinking outside the box! Great use of window stickers on a greetings card instead!

He's a really super Santa Kath and stands out really well against the glittery background.

FAB make - I tried to enter the R.D. challenge but it's not gone "LIVE" yet!

Fabulous card and your Santa is wonderful. What a great idea to use window stickers and thanks for the details on your glitter card, I shall look out for that when I go shopping xx

Hi Kath,
Happy Rudolf Days.
Oh how I love this wonderful card and that image is so perfect for Christmas.
I love all the sparkle as you know I am a sparkly girl.
What a fantastic find both those items were.
Thank you for joining the Rudolf Challenge.
Lots of crafty love. Jenny L.

I love your window sticker card design. So festive and cute!

Well done about repurposing that big Santa window sticker!! He looks great on your card, with all that glitter!!!

Well he's a big lad, that Santa! Love how glittery your card is - truly magical! I love that you've used window stickers too Kath - your card-making antennae must be out all the time! Vicky x

The window sticker has made a brilliant card. Non shed glitter card is the only one allowed in our house. Can’t stand the thought of glitter going everywhere. That wretched Elf has turned up. That’s all
I need. Hugs Mrs A.

What a great idea to use the wondow stickers. You are a true crafter!

The design looks great and Santa is standly proudly at an eye catching pose.

Thanks for taking part in the November Rudolph Days Challenge.