Good Morning another new challenge over at Penny Black and More and the theme for our November challenge is..

CHRISTMAS
We have a prize from Penny Black and a Voucher from Crafts U Love. 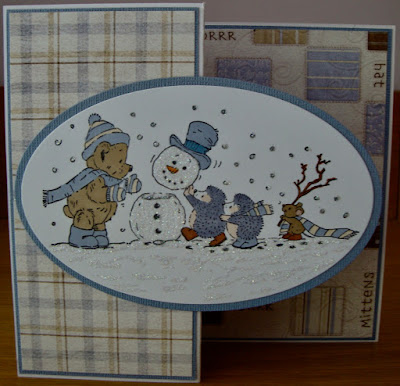 This Penny Black stamp is 10 years old.
The papers are from an old LOTV paper pad.
I have added glitter to the Snowman and at the base of the image and a little bit on the falling snow.

I have bought a nw PB stamp, not shown it yet, but that also had a lot of falling snow which was shown as black circles, which annoys me a bit, but I know they can not do it any other way.
So decided to go over the the black with a white pen and then glitter them, looks far better but I had made this card before and I wasn't going to do it again.

Sorry my Allsorts card was late being published yesterday but Friday night I went in to edit it and forgot to click publish, so it was just set as draft and I did not notice till the lovely Sarn informed me that my card was not on her RL.
Thanks Sarn.

Thanks for popping by and any comments you are kind enough to leave.

It's a really sweet image Kath and beautiful sparkle on the Snowman. How about covering the snow elements of the image with torn pieces of a post to mask, ink the rest of the stamp then when you remove the post it you can stamp and add your own snow. Lovely colours by the way.

What a cute Christmas card. That image looks great die cut on the lovely oval shape. Love the shape of the base card too.

Ps: I wouldn't have thought anything untoward about the "black" snow until you mentioned it. Still think it looks fine, but if you dislike it, Brenda's idea is a good one!

Cute stamp- oldie but a goodie! The snow looks fine to me, great design, love your colour choice and papers, another lovely Christmas make Kath.
xx

What a cute stamp and beautiful card!

Am laughing at B's comment... I had visions of you with a pen knife whittling a piece of fence post to cover the black dots!
Another great image and a fab layout!

Lovely image and your layout looks great too.

A lovely cute card Kath, love that image and your backing papers too xxxx

What a fabulous stamp Kathleen so adorable is your card x

Oooo you know me, I love PB's and such fabby papers too, Luv Sam x

Love your card with this classic PB image, Kath! The blues and the pp and the schparkle are great! I also loved hearing about Austin at my place. You'll have to keep me posted on him as he grows up. I feel like he's gonna BE somebody!! Hugs, Darnell

That's a lovely stamp Kath and I love the cool colours that you've used. The blue looks fabulous.....it's a superb card xx

aw, what a sweet image, all that team effort! i don't like the black circles either but i solved it with white liquid pearl drops. :)

Looks lovely to me Kath..
Such a sweet image and I LOve this design.
Chrissyxx
Pink is my name to stop my card being pinched lol.