Back again, with another challenge for Allsorts and our lovely Mervi has chosen the theme of ...
Feminine  (as it is Mother's Day over in Finland) so she would like to see to Feminine creations on your entries.

We have two stamps as our prize this week from Woodware, they are not our sponsor but have kindly donated these stamps. 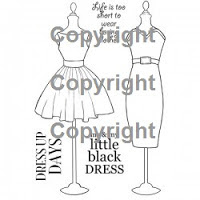 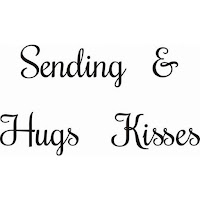 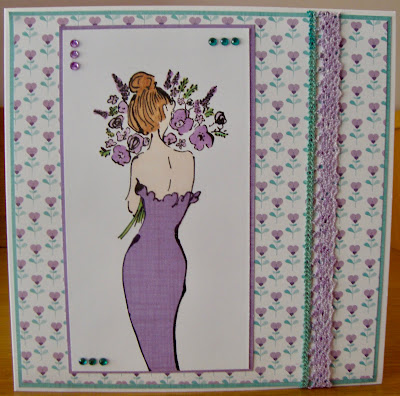 Papers - Hearts and Flowers - Craftwork Cards
Bit of lace coloured to match the papers.
Left the bottom right for name and sentiment.
Paper pieced the dress from the same pad.

I decided to bite the bullet and use a stamp that I have had for quite a few years now, that I actually won on the Penny Black and More challenge,  and I am ashamed  to say that this is the first time I have inked up this stamp.
To be honest I was put off using it as I am not good at colouring (hence I do a lot of paper piecing) and the skin frightened the life out of me, it also had a dressing table with it, that I did not know where to start with, so I have also left it out of this card, thank goodness they are separate stamps. Also the little bits of black are part of the image and it is not me that has cut it out wrong

But I bit the bullet and decided to give it a go, I am secretly pleased with it, more so because I have actually used the stamp at last and don't feel guilty that it could have gone to someone who could have used it immediately.

Thanks so much for popping by and any comments you are kind enough to leave.

Wow . . . What an utterly gorgeous card. You couldn't have chosen a more feminine stamp if u tried! It's lovely.

She's a beauty Kath and so elegant. Love your colour combination and background papers too. Enjoy your weekend x

Beautiful stamp and paper piecing, love the colours of the background papers, perfect with her flowers.

What an amazing image!

Isn't she an elegant lady and oh for a waist and hips like that. The soft lilacs are really pretty with the jade green.

Kathleen this is gorgeous love the image she is just the sweetest girl ever love the colours too! Enjoy your weekend x

That is beautiful Kath! I love the colours you’ve used.

Hi Kath, a stunning card, love the pretty papers, I love paper piecing too. Have a wonderful week... Megan

Spot on Kath! Glad you used your stamp. A FABulous design. Great colouring too hope you use it again soon.
Chrissyxx

I love this image, she looks fab Kath you did a fantastic job with her.

Gosh Kath, stop underestimating yourself. This is gorgeous. What a lovely elegant stamp this is and your paper piecing of the dress is a great addition. Hugs Mrs A.

Kathleen, your card is beautiful. I love the image and the color you have chosen is lovely. Also I added the directions to my blog on how I constructed my card. Thanks for the heads up.

It's a gorgeous stamp Kath, so elegant and definitely feminine, glad you got around to using it! Lovely colours and papers too, her dress looks fabulous paper-pieced and your colouring is beautiful, you underestimate yourself!:)
xx

No wonder you were please with it Kath.... it's beautiful! Because of the paper piecing and the matching background paper, it really looks good - and I do love that oh-so-feminine stamp!