They say that the Number Seven is a luck number, well it has been very lucky for all you bloggers who have stepped into the Playground under the careful eye of Miss Di and Parsnip for the past seven years.

I am ashamed to say that I have been absent with out leave for quite a while but I got fed up of being thrown in the duck pond by Sarn. 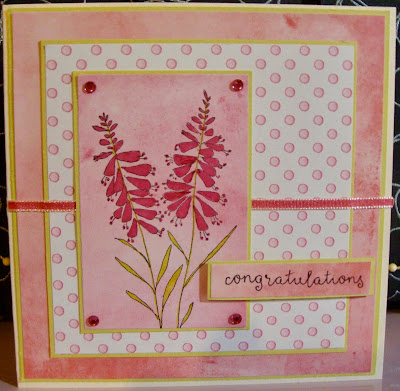 This is a dreadful photo and the image really does look better in a paler colour. But I wanted to do a pink card.
Pink to make the boys wink, wonder if that is why Di like pink?

I have chosen this image as it is because of this Penny Black stamp (Clusters) that I have had two fabulous and faithful followers.

The lovely Sarn had entered, I think the PB Saturday Challenge using this image and I could not believe how she made such a great job of colouring it, due to the very small petals.
I left her a comment saying I had this stamp and how I was in awe of her colouring, or words to that effect, as it is years and years ago.

Di must have read my comment as she left me a message saying that Sarn had coloured it by using the Promarkers fine tips which she had given her to try and that she had some of these as blog candy.
Well I had never entered any blog candy and I never have since but on this occasion I did, not expecting to win at all.

BUT I did and so did everyone else who entered. Totally unexpected but so thankful.
I have bought quite a few since then but they are no longer available, mores the pity.
That's Di, so generous.

I have been very lucky to meet Di, she came to Leeds on a School Reunion and we met up at LOTV in Leeds and I was a tad early so went into the shop and was browsing when I felt to look at the window and there she was with her face pressed up against the window pulling a fund face, well it could have been a funny face but it also could have been her normal face?????!!!!

I have suffered through her recipes and the Christmas concerts in the Playground to be honest I am surprised that poor Parsnip is still in one piece.

I have a great respect for Di and her commitment to the Playground.

Thank you and I have written 100 lines to say that I must do better!

Thank so much for popping and any comments you are kind enough to leave.
Sorry for the long post but Di deserves it.
Oops for got to mention that there are lots of snippets on this card.

beautifully coloured stamp Kath, the soft pinks are so beautiful.

Well . . . HOW ELSE was I supposed to teach you to swim then? At least the Duck Pond was relatively shallow! Now come on . . . dry yourself off and meet me round the back of the bike sheds for something that will warm the cockles of your heart and make you feel a whole lot better! Here's a chocklit truffle to be going on with!

I LOVE your pretty in pink card for Miss Di. That stamp is so lovely and who knew it could lead to such good friendship?

So glad we've been friends for so long, and long may it continue.

lol Kath your post is so amusing l just love the 100 lines so true though what you have wrote about Di she is so lovely and has kept the Snippets challenges going with great wins and cracking stories regarding parsnip and her new family member Dudley and wow your card is gorgeous the floral image is a stunner and the pink backing papers too...enjoy your day take care x

It's a gorgeous pink card and perfect to honour Miss Di. As for the Playground.... mmm whenever anyone mentions trouble Sarn's name always seems to crop up - still we wouldn't have it any other way! Be careful round the bike shed as the last glass I had was a little on the strong side (not sure who brewed it!) xx

What a great post Kath! I really have enjoyed reading it, though I must admit I'm a tad concerned that you're still associating with Sarn, you nearly caught your death last time she chucked you in the duck pond, it's all very well for her to say she was teaching you to swim but the water's only 2 feet deep at most! And it's smelly!! As for the shenanigans behind the bike shed, the least said the better!!
It's a lovely tribute to Di, and all the fun and enjoyment she's generously provided over the years and your card is gorgeous.
xx

Fantabulous make and a lovely post from you, Happy SNIPPETversary

What a fabulous post to honor Di!!! I also love your beautiful card, never heard that saying, pink to make the boys wink. lol I love that and will have to keep that tucked away. I also love the story of when you and Di met up, how fun was that?!!! A little envious as I'd love to meet Di, but very happy for those of you that have. I don't always get to play along as much as I want to either, but love it when I can! Again beautiful card, loving that image and the pink as I love pink too. lol Hugs, Brenda

A lovely card and great post too.
Kath x

Glad you managed to pull yourself out of the duck pond and share this beautiful card.
PS meet you behind the bike sheds later - I'm bringing GIN!

Bit chilly for the duck pond today ours is frozen over! What's needed is a hot toddy. I love your pink card.

Beautiful card, Kath, perfect in pink. Hope you dried out following all the times you've been thrown in the duck pond. If it happens again, remember to keep hold of Sarn and pull her in with you! Loved reading your post. xx

SMile, smile Kath, short and sweet as upped meds in mornings as weel since Wednesday so typos galore till used to them again. B x

Hi Kath , a funny post to honour Miss Di and her seven years as Headmistress at Snippets Playground.. love the pretty flowers on your card. Have a wonderful weekend.. Megan

A pretty card Kath, and I think Darnell like Di is something special...I'm new to the playground, but I do enjoy reading Darnell's blog, she can brighten anyone's day, so thank you Darnell and Di and congrats on the seven years as headmistress...so Kath long posts are good, I'm sure to join in the fun

A gorgeous snippets card for a lovely lady!

A gorgeous make perfect for Miss Di after reading the story - how interesting.

I enjoyed every word of your post, Kath! And I love your pink card made just for Di and her love of pink! Thank you so much for joining in the Hop to surprise and thank her! See you in the tree house later. I'm bringing along two hulky sailors from the boat to carry us up there, woo hoo!! Hugs, Darnell

This is so pretty Kath, a fabulous card.
Pauline - Crafting with Cotnob
x

Fabulous card...pretty in pink and wonderful colouring. By the way I hate to say this but Is that duck weed in your hair!!..lol

Wonderful card Kath and you used a favourite image plus pink! And what lovely words you wrote my dear friend (apart from is my face normally funny!!). I'd totally forgotten that we linked up through the Pro marker fine line nibs - we seem to have been friends forever. And long may it last - unless Sarn manages to drown you in the duck pond of course!

I've had a few tearful moments during this wonderful blog hop - happy tears but tears none the less!

What a lovely card and I loved the story behind you making your way to the Snippets Playground. I have made lots of blog friends from there too. Such a wonderful, fun and happy place.

I have this image too and must admit to not using it anywhere near enough. Must dig it out again!

Hope all is well with you.

Well I think the card looks fabulous in the photo - so if it's better colours in real life, then it must be amazing! Of course, you know how I love PINK - so this one is right up my street!