Good Morning All - I have chosen the theme for this week and it should have been my turn to host the challenge but the lovely Tracy has stepped in to do the challenge post for me, HUGE thank you to Tracy

I have chosen the theme of Milestones so your creation must have a number on it.
It can be for a Birthday, Anniversary, or anything that requires a number on it.

The prize this week is some Tattered Lace Embossing Folders.

Here is my card. 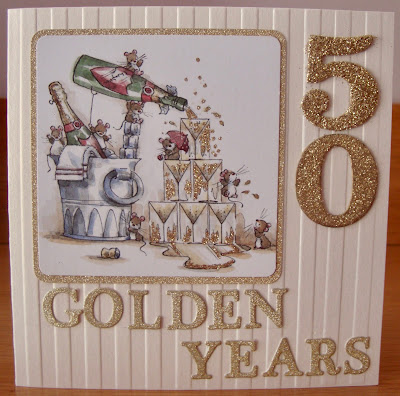 The image is an old LOTV but I have added a touch of glitter glue to the champers falling out of the bottle and in the glasses.
The card is cream and I have used an old SU, embossing folder.
The 50 is chipboard numbers from Craftwork Cards, a long time ago,
that I have covered with gold glitter.
The wording is die cut from gold glitter card.
The lettering doesn't look straight but it is, it is the photo that isn't.

This card is for my Hubby, a plain and simple card because he has no interest in cards what-so-ever, and I have no doubt that this card will be in the bin the day after the event, as are his Birthday cards.
The anniversary is not till April but I have a another milestone this month which we won't talk about.

Thank you for popping by and any comments you are kind enough to leave.

Hi Kath, a beautiful card to celebrate a fiftieth anniversary, love the sparkle.... have a wonderful weekend... Megan

Fabulously glittery card for the anniversary milestone. MANY CONGRATS (in advance).

I will need to have a word with you about your own milestone Madam.

Fabulous card for your anniversary Kath...shame to chuck it in the bin the next day...what a philistine...tell him he doesn't deserve you :))
Let's talk about your other milestone....
Have a lovely week.
Chris
x

Wow.... this is a fabulous anniversary card Kath.... don't let your hubby throw it away - it's far too lovely for that.

Beautiful card Kath, don't worry your not alone, none of the men in my family believe in giving greeting cards, never mind keeping those they receive

Hi Kath, your card is fabulous and I love the added sparkle to the champers. My hubby is exactly the same with cards so I don't even bother making him one! xx

So loving this card, Kath. Adorable image and all the sparkle looks amazing! I may need to see if this image is still available!
Hope you have a wonderful time!

Love the sparkle - looks fab. Congrats for April - that really is a milestone!

It's a fab card for the upcoming event Kath and perfect for your theme, hope you are having a good time and Tracy have everything in hand back here.

Hi Kath,
what a very beautiful card and as you know I'm a glitz girl so this is a real fave with me.
Hubby and I have 2 milestone Birthdays this year too.
He will be 80 and I will be 70.
Congrats on 50 Golden Years in April.
Hope you are enjoying your self.
Lots of crafty love. Jenny L.

A super card Kath, such a fun image and great design.
Pauline - Crafting with Cotnob
x