Officially the last Rudolph Day of 2018 over at Scrappy Mo's.
I say officially because once again Mo is running the challenge in December for all of us who have not won a prize this year.
I  actually won a prize in the first R.D. challenge that Mo ran after she had taken over the baton from Sarn, who used to run the challenge. 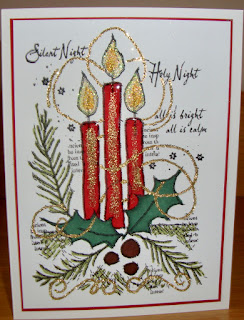 For my card I have used a Woodware stamp, called 'Three candles'
which sort of reminds me of the sketch by the Two Ronnies - Four Candles (Fork Handles)
I have added lots of glitter and glossy accents to the candles.
To be totally honest the jury is still out on this one.

I am sure that you will all join me in saying a huge...
THANK YOU to Mo for running the challenge and the team for all their lovely inspiration and comments this past year.

Thanks so much for popping by and any comments that you are kind enough to leave.

A lovely card and a super stamp too. I think the two Ronnies sketch is one of my favourites!
Kath x

Beautiful card with a lovely traditional stamp and lots of festive sparkle!
Three candles doesn't have quite same ring as four candles does it...but I know exactly what you mean! Doesn't matter how many times I see that sketch I still laugh!
Chris
x

A beautiful card Kath, with lots of Christmas sparkle.

That is absolutely gorgeous, Kath! I love it! I too love the Four Candles sketch!

Beautiful, sparkly card, Kath. The two Ronnies sketch still makes me smile when I see it. So funny! xx

Hi Kath, a pretty and very sparkly card for your stash, not long now until they are stamped and addressed off to family and friends. have a wonderful week... Megan

Belated Happy Rudolph Day to you Kath. I think this card is FAB. Love the use of traditional colours and the extra glitter.

As far as I'm concerned, Mo is a HERO for continuing the Rudolph Day Challenge.

A beautiful card Kath, such a lovely stamp.
Pauline - Crafting with Cotnob
x

Lovely card with a beautiful image, love all the sparkle

Haha, fork handles! That was a new one on me and I got quite a chuckle out of that, Kath! Your three candles are very festive and you've made a lovely card! There! I'm a jury of one and that's my vote!! ❤Hugs, Darnell

I can see the sparkle, Kath. It looks fabulous!

Thanks for the lovely compliments and also thanks for taking part in the November Rudolph Days Challenge.