Another week has flown by so we have a new challenge over at Allsorts.
This week is the turn of our lovely Susan and she has chosen the theme of...

A really wide range of options for you with this theme.
Our sponsor for this challenge is Sticker You 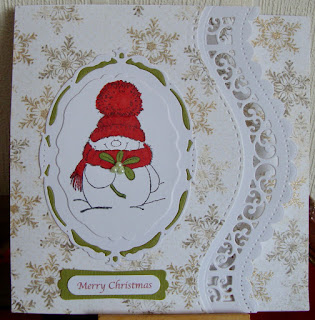 I have used Penny Black stamp from the Jolly Friends collection.
Spellbinders dies for the border and for the image.
The gold papers are from a First Addition pad, they have some glitter on them but you will not be able to see it. The front of the card ends at the edge of the die and I have used the same papers on the inside of the card.
Sentiment computer generated and backing punch SU.

Getting excited as I am going to the Dome at Doncaster tomorrow and will be meeting up with Brenda and maybe some other members of our team.

It seems that there is some problem with the comments I am leaving on most of your blogs, they seem to disappear. Had no idea about this till I had a comment from one of my followers asking if I was ill or had been away as she had not had a comment from me for a while. Well I had posted a comment on every post she has made but it was not there. As I was doing my commenting last night I checked out all your older posts as well and there was no comment showing from me.

I can assure you that I have been leaving comments and they have stated that they have been published but no idea why they are not there and I have also no idea how long this has been going on or why it has changed but I do apologise and wish to let you know that I have not forsaken you.


Thanks for popping by and any comments that you are kind enough to leave.

How stange for you, I just popped to my blog so I could let you know and I have comments from you on my last few post.

Such a pretty border die on your Christmas card, the Snowman looks like a smaller version of good old Snowy.

love the layout you used for this gorgeous snowman Kath,just to let you know I have received comments from you

Sweet and pretty card.
I've got your comments, but have to look them at blogger's comments inbox, your email goes still to the junk mail!
Have a great weekend at craft meeting;-))m

I’ve just read on Brenda’s blog that you’re going to Doncaster tomorrow. I’m going too so I hope that we might get to say hello :) x

Sorry Kath, I deleted one comment due to an error and now I’ve accidentally deleted my comment about your card. I said that the snowman is a real cutie and I love the touches of red and green too. It’s a lovely card x

Perfect challenge theme for you this week Kath! Beautiful design, love the die cut border and the gorgeous papers, the PB snowman is the cutest!
How weird that some of your comments aren't publishing! I haven't had any from you for some time...was beginning to wonder if I'd done something to upset you and was going to email you this weekend!!! It's a relief to know that it's Blogger and not something I said :) but how irritating for you ...and what a waste of your time!
Hope you have a great time at the Dome...don't go too wild in the aisles!!!(That's if you have time to look at the stalls, you'll be too busy meeting up with friends!)
Chris
x

Your comments always go in my spam! but I find them eventually.

Love this card, so pretty.

Love the curly/wavy border. On this sweet card. Oh dear not another one having troubles. I'm just about ready to give up with it all and then I remembered a sign in my daughters loo saying When you feel like quitting think why you started !! Hugs Mrs A.

What a cute snowman card Kath, and loving that gorgeous border. A beautifully done card!

A beautiful card Kath, such a fun snowman and fabulous design.
I am receiving your comments, I have turned comment verification on so they will not always show straight away - I have to approve them first.
Pauline - Crafting with Cotnob
x

Lovely card Kath, I am getting your comments but they still go to my spam mail no matter what, but I know it's you.x

Hi Kath, a fun and festive little snowman, love the pretty paper and fancy edge you added... not sure what is going on with commenting sometimes it works, some times it doesn't and then sometimes I end up with double the number that actually exist.... Have a wonderful weekend... Megan

I’ve just scrolled back and your last comment was 18 September! Whatever have you done to upset Mr Blogger😱, your card I’d gorgeous, I do love that snowman. xx

This is one of those stamps that make me smile every time I see it.
LOve your colours and design Kath. Those little pearls are just perfect too.
Hope your enjoying your day at the dome and come home with lots of ideas, tired feet, but, happy.
Chrissyxx
Mr Blogger really does have a lot to answer for!! There's always something different happening! You know I can vouch for this.

Hi Kath,
I have no probs with your comments I get them all the time even though they go to spam.
I did have a warning once about opening you comment, but I ignored it as I know you.
Blogger sure does do some weird things.
Love this wonderful card and your super design.
That snowman is such a cutie I could just cuddle him.
Beautiful colouring too.
I love that paper pad too, but can't find mine at the mo. LOL.
Lots of crafty love. Jenny L.

Forgot to say enjoy your meet up at Doncaster.

Sorry I expect that has happened now as I am late commenting.
So I will revise that to hope you had a great time with your meet up at Doncaster.

Lovely card Kath and a sweet snowman.
Sorry l didn't manage to get to Doncaster, just ran out of time and sadly did not get all my visiting done either.
x Susan x