We all have lots of favourite stamps and some go back quite a few years but over at
Stamping Sensations they want to see what is your favourite stamp at the moment.

Now my current favourite is Penny Black - Cling Stamp - Awaken
I have made several cards with this image but only published one, so far.
I must admit that I was so unsure about buying it, but was so glad that I did as I love it.
One thing that I really love about it is the fact that it has no leaves. Sometimes I think that a lot of flower images have far too many leaves. 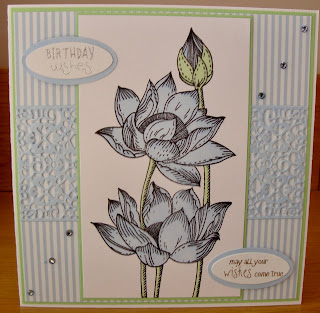 Most of the cards that I have made with this stamp have been really bright and bold colours and paper pieced, but for this challenge I decided to do a more paler shade and colour it with Promarkers and for some reason chose blue, now I hardly ever use blue, but there you go.

I also coloured some white card with the same blue and then cut out the die and then punched out the SU ovals for the sentiment backing.
Sentiment Craftwork Cards

But I did origanally do a bright and bold card for this challenge so I may as well show you that as well. 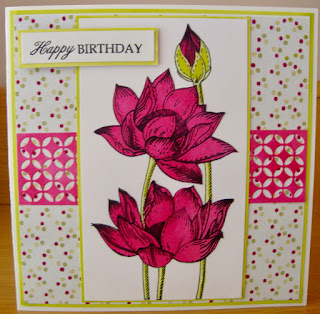 The backing papers are NitWits but you won't find them as the original image for this paper had very pale pink dots and I just went over them with a ProMarker that was a very close to the PR colour.

Oops, had to edit this as for some reason called the DI. Pickled Raspberry.

Just to remind you that the Allsorts challenge "From Boys to Men" runs for another week.

Thanks so much for popping by and any comments you are kind enough to leave.

two beauties Kath I especially like the bold dark pink one

Well I can see why you love this pretty stamp Kath. Two gorgeous cards with great layouts too.

Two really pretty creationsw Kath and agree it is a lovely stamp which I am sure is in my stash somewhere. As you know I love bold colours and a big fan of paper piecing but like you rarely use blue and on this ocassion I think it is my favourite, the shade of blue is realy subtle and coordinates with the lace and DP prfectly.

It's lovely to see you at Stamping Sensation and so pleased you shared a favourite stamp with us, may thanks.

The stamp is beautiful Kath, can quite see why it's your current fave! Didn't notice the lack of leaves until you mentioned it, it certainly doesn't need them. Love how you've showcased it in both your designs, you've demonstrated it's versatility (and yours!) by colouring one image and paper piecing the other! I always love to see how different the same image can look by the way it's used. Can't decide if I prefer the subtle elegance of the blue card or the striking 'pickled raspberry'!
Have a lovely weekend.
Chris
x

Oh Kath these are just fabulous and what a corker of a stamp as well! i truly am not able to pick my fave! Both are just so lovely.

I looked at my PB Santa's Hat stamp today and your die you so kindly lent to me - my right shoulder is in agony though (Arther Rightus strikes once again) and the thought of stamping umpteen times using the wooden stamp and then all the die cutting was beyond me. Instead, I sat and felt sorry for myself and also ignored Mount Etna of Ironing in the F'Utility room!! Before long it will come looking for me in the middle of the night!

Beautiful cards Kath, they are both pretty but I especially like the soft blues on the first one.
Pauline - Crafting with Cotnob
x

Hi Kath, a pair of gorgeous cards, I think I like the pale blue card with the soft colours best but the picked raspberry is stunning too. I actually thought the DI was called pickled raspberry until I got a DO ink... have a wonderful week... Megan

Beautiful. Have this one too Kath and just love it.xx

Two gorgeous cards Kath and you’ve shown just how different a stamp can look by changing the colour palette. Your first one with its delicate colours would be a good choice for a sympathy card too. Then comes your second card with it’s bright colours. I just love that vibrant pink, it’s absolutely gorgeous. Thank you for sharing your first card with us at Stamping Sensations and good luck. Sandra x

Fabby. I do hope your not going to tell me this is an old stamp and
I will have to go searching all over the web to get my mitts on one!! .?
Love both the colours you have used . Cards look so different. Hugs Mrs A.

P.s. Bet you saw spots before your eyes after colouring all those pink dots in. There's dedication to the job for you. Hugs Mrs A.

I LOVE both of these! I bought that image after seeing so many pretty cards made with it, and it's a NBUS. It looks so different with each of the treatments you gave it. Also love the design layout and the pretty papers you've paired with it. Good job on both these beauties! TFS & Hugs

Haha, Kath, I'm sure I would have called it Pickled Raspberry, too! I wonder if anyone even noticed? I can't believe you sat there and colored all those raspberry dots on your bright and bold and beautiful pickled card!! It's nothing short of amazing! And I'm glad you followed your Muse and went with blue on your first card because it looks brilliant in the softer colors! The ink shading really stands out! Love them both! Hugs, Darnell

I can quite see why this is your current favourite stamp, it's a beauty! Your cards are absolutely gorgeous, and I like both colourways, which show the versatility of the image. Thank you for sharing them with us at Stamping Sensations.

Well, would you know.... I really love the beautiful pastel blue card... but then I'd have been really upset if you hadn't have shown the fab hot pink one too!! (Not that I'm biased or anything... )