This little fellow made his first appearance on our Allsorts challenge on the 31st December where the challenge was something new, as he was then.
Well he is back again with another design of card. 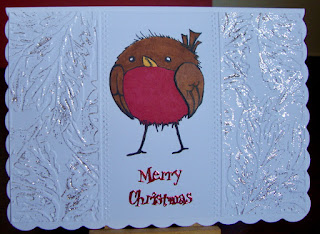 While I was at it I made a few more. 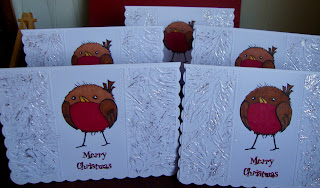 So there are six in all.
The embossing folder has no name as they were sent to me by a lovely blogging Friend, quite some time ago actually but I had forgotten where I had put them but while hunting for some other lost item, I came across them and decided to use them for this image.

I dabbed glitter glue over the leaves, which is not good for a photo but I hope you get the idea.
The Robin is part of a set by Hobby Art and yes he will be appearing again later on.
I actually stamped the wings again and paper pieced them to give a bit of a lift but to be honest it didn't make too much difference.
Sentiment - Peel off.

I suppose it sounds like my craft room is a bit of a tip but it isn't really, I just move things around and swop them from one place to another that I forget where I have put them.

Awww, I love this cute little card for Rudolph Day! That Robin is just the cutest!!!! Love the embossing too. Good for your for making so many, just what we need to do to build our stash!!! I don't know how we got to the 25th already, this year is going to march by as fast as last year! Hugs, Brenda

The little robin is really sweet and the embossed borders look gorgeous especially with the sparkle. A very pretty card. Barbxx

Good to see this cute little fella again Kath, your design is lovely with the fab embossed panels.
I often lose thing in my craft room too...probably because it IS often a tip...I'm a very messy worker no matter how often I tidy up...and that's usually when I can't find stuff!
Chris
x

Love this design, the robin is so cute and is perfect sat between the lovely embossed panels. I have this embossing folder too, it's a Couture Creations e/f, 'Bon Jour'.

Hi Kath,
what a very gorgeous card and I love your super cute Robin and your wonderful design.
As Always you always make more than one too.
So you must be well up on your Christmas cards already.
Thank you for joining the Rudolf Challenge.
Lots of crafty love. Jenny L. GD

My gosh Kathleen that is the cutest little bird.

what a sweet little robin and lovely embossed panels too.

Six wonderful cards. I love that sweet robin and when I enlarged the photo, I could see clearly your paper pieced wings. I am sure if I was not almost 63, I would not have had to enlarge it...lol

Thanks for taking part in the January Rudolph Days Challenge.

This is a fabulous card Kathleen. I really like how you've embossed it on both sides and stamped in the middle, it frames the image beautifully. The Robin is such a little cutie too. I've just noticed that you live in West Yorkshire, so do I :) Happy crafting, Sandra x

fantastic layout and robin Kath, the glittered embossed leaves set him of beautifully

A gorgeous collection of card here, I love the lovely robin you've used.

So cute and adorable!!!Thank you so much for joining us at Rudolph days challenge this month ! Gloria x

Oooo i love Robins and love your stunning design too and thanks for joining us at January's Rudolph Days Challenge, Luv Sam x

You've really classed up this darling cheeky robin (that I absolutely love!) with the elegance of the side embossing. This is just a gorgeous set of cards! TFS & Hugs

That's definitely a robin with attitude Kath... with his chest all puffed up!! Love how you used him withe embossing too.. and of course... sparkle!! Can't get over that you have Christmas cards made in January though........ bet you forget where you put them too!! hehe! Isn't it nice to discover something we forget we even had though?? I've done that before!

Goorgeous Rudolph card Kath, that is one super robin and I like the embossed panels xx

This is a nice plump looking robin and beautifully coloured. We have 2 robins visit in the garden. The doc got waylaid this morning halfway through putting the feed out for the birds and I spotted one of the robins helping himself from the bowl he had left on the garden table. He was perched on the fork and happily stuffing himself. Course by the time I thought to get the camera he had flown off. Hugs Mrs A.

Happy Rudolf day, Kath! These are gorgeous cards! I saw three robins for the big garden bird watch this morning, but none of them were that plump or they might have taken on the blackbirds!

I always love to see a chubby robin, these are delightful

He! he! What a sweetie he is..I can see his wings been paper pieced Kath and it is worth doing. Can't beleive how many you've made..more than me that's for sure. GORgeous embossing folder and pretty glittering..I'm not messy! I have a 6" square piece of desk to work on lol.
Had a bus ride into Halifax today..booked a couple of shows.
Chrissyxx

Hi Kath, a super cute robin and that embossing folder creates a great focal point, love the glitter over the embossing, Christmas cards should always have a little sparkle! Have a wonderful week... Megan

Hi Kath! I missed this one, such lovely plump robins. Great cards and the EF is called 'Bon Jour', made by Couture Creations. I have it too.